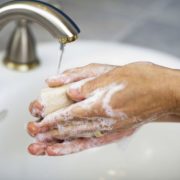 SLS (sodium lauryl sulphate) is one of the chemicals I’m allergic to. SLS aggravates my dermatitis, causes the skin on my forehead and the back of my hands to become paper thing. SLS in toothpaste made my gums bleed and even worse, causes deep tissues in my tongue which would bleed so much the hand basin would turn red. This all started to happen when I was about 50, so you can imagine how I found it all a bit depressing! While studies have shown that SLS used in hand soaps does not cause any lasting irritation, the US National Library of Medicine and National Institutes of Health found the following: Dermal toxicity studies demonstrate that 24-hour exposure to a 1–2% (w/w) solution of SLS can increase the transepidermal water loss of the stratum corneum – the outer most layer of the skin – and cause mild yet reversible skin inflammation. Human patch tests (typically a 24-hour exposure) confirm that SLS concentrations >2% are considered irritating to normal skin. Dermal irritation also tends to increase with SLS concentration and the duration of direct contact. In reality, dermal exposure to SLS in cleaning products is more likely to last a matter of minutes rather than hours. But every person’s sensitivities are different, so if you have these problems then you should also try to avoid SLS in your cosmetics and soaps.  This is why when we saw the opportunity to use SLS-free aqueaous cream in our skincare range we went for it. This is my routine to avoid SLS use:

All our skincare range is SLS-free, but is just as effective as ever. 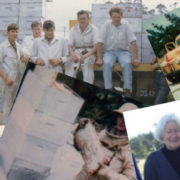 My father developed the Classic Skin Cream for his psoriasis and I developed the Very Sensitive Cream for my dermatitis, it would be nice to think that as each new generation of Davidson takes over management of the business, they might endeavour to develop a new product from our original beehive extracts.   Dad had psoriasis all his life, but he didn’t apply the cream every day, and later when he tried my Very Sensitive Cream, I saw for myself how the cream reduces scale, and his skin became mostly clear and healthy looking. I also saw that it would stay this way for a couple of days and then the scale would return, but not nearly as bad, and further use of the cream would stop it growing. I have dermatitis which can at times be as itchy as a hundred mosquito bites. Since developing the Very Sensitive Cream I have been paying more attention to the cause, effect and treatment of my dermatitis and I thought I would share my regime with you in my first Note.  Often problems arise with me when eating food I’m either allergic to or have an intolerance of, and end with my system sweating out what it considers to be toxins onto my skin – then the itching begins.

So here is what I do and it works for me, it may not for you, but perhaps it may go some to help with your own coping strategy.

After once developing an allergy to something I could not explain I suffered from severe irritation, and despite using my coping strategy the irritation wouldn’t go away. I stopped using the cream and within hours an area of skin had cracked and was bleeding. My doctor gave me cortisone cream and this gave me a break from the pain allowing me to examine my diet for what was the new addition.

The most important thing for me to come out of this episode was that using the Very Sensitive Cream kept my skin healthy and when I stopped using it my skin became dry, cracked and bleeding. The extracts may not have been able to prevent a full blown allergic reaction but it was able to minimize the damage and help my skin recover that much faster after using the cortisone cream.   Protection, nutrition, repair.

These are the core aims of the creams that my father and I have developed and I wonder what the next generation will create to help control allergies and intolerances. In our move from Timaru to the Wairarapa, some customers were concerned about whether they would still be able to buy our products. I assure them that Davidson’s will always make these products, because we use them ourselves.

I have a lot of sympathy for those of you who suffer from skin conditions, and hope you find some relief with us. 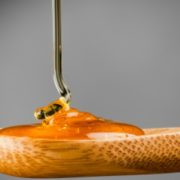 Medical professionals sometimes use honey successfully as a topical dressing, but it could play a larger role in fighting infections, researchers told a meeting of American Chemical Society recently.

“The unique property of honey lies in its ability to fight infection on multiple levels, making it more difficult for bacteria to develop resistance,” said study leader Susan M. Kenley Jansen Authentic Jersey Meschwitz, Ph.D. That is, it uses a combination of weapons, including hydrogen peroxide, acidity, osmotic effect, high sugar concentration and polyphenols — all of which actively kill bacterial cells, she explained. The osmotic effect, which is the result of the high sugar concentration in honey, draws water from the bacterial cells, dehydrating and killing them.

In addition, several studies have shown that honey inhibits the formation of biofilms, or communities of slimy disease-causing bacteria, she said. Nike Air Max 2016 Dames Zwart “Honey may also disrupt quorum sensing, which weakens bacterial virulence, rendering the bacteria more susceptible to conventional antibiotics,” Meschwitz said. Nike Air Max 95 męskie Quorum sensing is the way bacteria communicate with one another, and may be involved in the formation of biofilms. nike scarpe italia In certain bacteria, this communication system also controls the release of toxins, which affects the bacteria’s pathogenicity, or their ability to cause disease.

Meschwitz, who is with Salve Regina University in Newport, R.I., said another advantage of honey is that unlike conventional antibiotics, it doesn’t target the essential growth processes of bacteria. adidas ultra boost hombre The problem with this type of targeting, which is the basis of conventional antibiotics, is that it results in the bacteria building up resistance to the drugs.

Honey is effective because it is filled with healthful polyphenols, or antioxidants, she said. buty Asics Męskie These include the phenolic acids, caffeic acid, p-coumaric acid and ellagic acid, as well as many flavonoids. “Several studies have demonstrated a correlation between the non-peroxide antimicrobial and antioxidant activities of honey and the presence of honey phenolics,” she added. new balance 997 on sale A large number of laboratory and limited clinical studies have confirmed the broad-spectrum antibacterial, antifungal and antiviral properties of honey, according to Meschwitz.

She said that her team also is finding that honey has antioxidant properties and is an effective antibacterial. Air Jordan 9 Retro “We have run standard antioxidant tests on honey to measure the level of antioxidant activity,” she explained. “We have separated and identified the various antioxidant polyphenol compounds. In our antibacterial studies, we have been testing honey’s activity against E.